You are here: Home › Actualités › ‘Paper lives’: Massive immigration fraud detailed at sentencing
By HoSung Kim on 31 octobre 2016 in Médias

The details of one of Canada’s largest immigration scams were laid bare at a sentencing hearing Friday for three Richmond women who helped hundreds of Chinese applicants lie and cheat their way to permanent residency and citizenship.

The Crown says Jin ‘Fanny’ Ma, Wen ‘Vivian’ Jiang and Ming Kun ‘Makkie’ Wu should spend three years behind bars for the work they did as employees for two unlicensed immigration consulting businesses.

The mastermind behind the scheme, Xun ‘Sunny’ Wang, has already been sentenced to seven years in jail. He lost an appeal several weeks ago. The scheme’s discovery has resulted in reviews of more than 1,200 immigration files.

« Largely, the clients of Mr. Wang and the consultants were making illegitimate applications to Canada for either permanent residency or citizenship, » Crown prosecutor Bonnie Macdonald told the judge.

« He was the engine and the consultants were the wheels on this car. »

‘That raised some suspicions’

The scheme started to unravel in 2010, when immigration officials in Edmonton noticed a strange coincidence concerning applications for renewal of permanent resident cards: 63 people appeared to be living in one house.

« Of course, that raised some suspicions, » said Macdonald.

The trail led back to Wang’s immigration consultancies. Canada Border Services agents raided his home and the offices of both businesses — New Can Consultants and Wellong Investments. 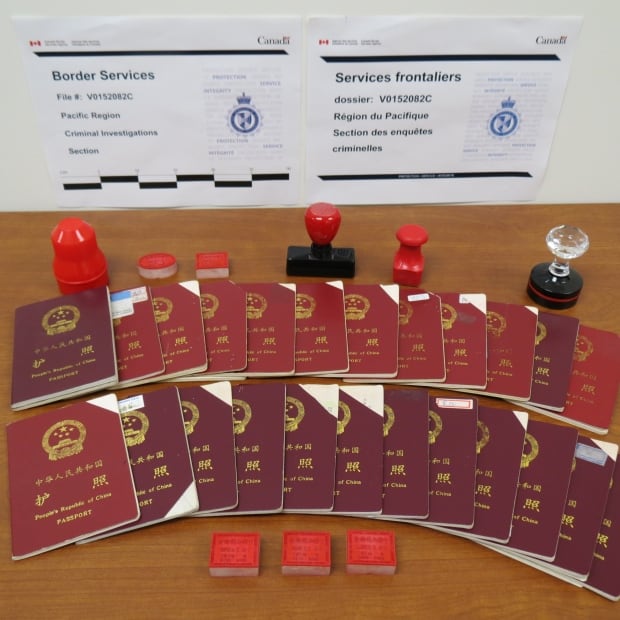 Canada Border Services Agency seized these passports from Xun ‘Sunny’ Wang, as part of an investigation into his immigration fraud scheme. (CBSA)

They seized 90 boxes of files,18 computers and 200 passports, ultimately ending up with 12 terabytes of information, including tens of thousands of emails. It took a year to get everything translated.

Many of the files were opened on behalf of so-called ‘astronaut’ families: situations where a wife and children live in Canada, but the husband works in China.

Immigration rules require a permanent resident to spend two out of five years in Canada. But many applicants were only here for days — as evidenced by the stamps on their passports.

Wang and his consultants offered to change the records. They advised clients on how to get two Chinese passports: one they travelled back and forth on and another they showed to Canadian officials.

Macdonald said they would also send passports to China to be manipulated with false stamps showing frequent entries and exits.

In Canada, the consultants worked with « address providers » who would rent apartments, set up phone lines and then answer calls from immigration authorities trying to reach the applicants registered to those addresses. 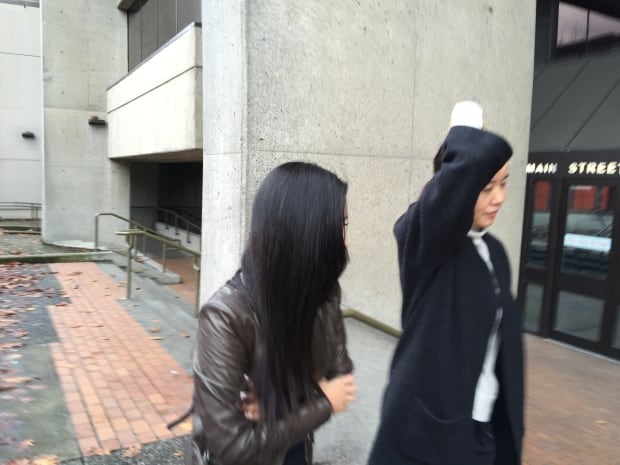 Ming Kun ‘Makkie’ Wu (left) and Jin ‘Fanny’ Ma declined to comment as they walked from the courtroom. (Jason Proctor)

Wang also incorporated shell companies which appeared to hire his clients as proof they were working in Canada. They gave him money which he paid them back as salary. They filed income tax returns and received benefits and tax credits in return.

« There would be these phony corporations — phony jobs created within these corporations and all the necessary paperwork was being manufactured. »

Macdonald read portions of emails tying each of the three women to Wang and the hundreds of clients they were in charge of helping. In addition to various other types of fraud, all three were also coaching clients on what to say to border agents when they came into Canada.

None of the women were licensed to work as immigration consultants. And to make matters even worse, all three earned hundreds of thousands in commission which they didn’t declare to Revenue Canada.

As a result, they received tens of thousands of dollars back in tax refunds and collected hefty benefits and tax credits to boot.

The women sat listening to a Chinese translator as Macdonald outlined the case against each of them. The small courtroom was full: with family members on one side and immigration and tax officials on the other.

The women are asking for a sentence of two years less a day, which would qualify them for conditional sentences to be served at home.

Wu and Ma are Canadian citizens, but Xiang is a permanent resident; her lawyer says she could be deported if she gets a sentence of more than six months, whereas the Crown says she’ll be sent back to China no matter what.

Outside court, the lawyers for the three consultants said their clients have already paid a heavy price for their actions.

« All three of them started employment with these companies thinking that it was real and legitimate employment and over time became increasingly aware that there was fraud taking place, » said Johnson.

« While what they did was serious, it doesn’t amount to what the main perpetrator of these events did. »

An immigration official in the courtroom indicated that all 1,200 files in the case are under review. As investigators uncover evidence of fraud, they may act to strip citizenship or permanent resident status.